I chose the first two entries in my Wonderful Latin Names series for the sound of their names. Today’s entry celebrates names that are wonderful for a different reason: for the amazing story of the woman for which each species is named. Opsiphanes cassina merianae Stichel 1909, a South American butterfly, and Erinnyis merianae Grote 1865*, a Cuban sphinx moth, are both named for the 17th century entomologist Maria Sibylla Merian**.

A species’ formal name can describe its appearance (Solidago gigantea) or indicate where it lives (Amolops hongkongensis). It can mention the species’ discoverer (Geoballus caputalbus), a taxonomist’s friend, partner, or relative (Solidago brendiae), a benefactor (Avahi cleesi) or a celebrity (Aptostichus stephencolberti). It can even be a joke (Abra cadabra). But Erinnyis merianae and Opsiphanes cassina merianae are examples of names that honour a scientist’s accomplishments. If you’re already familiar with Merian, her life story, and her work, I’m sure you’ll agree no entomologist has ever deserved the honour more. If you don’t, read on.

Maria Sibylla Merian was born in Frankfurt in 1647. Her life would take her from printing shop to ascetic commune, from Germany to Holland to Surinam and back again. Her botanical and (especially) entomological observations and her skill as an artist led her to publish revolutionary books on the development, metamorphosis, and natural history of Lepidoptera and other arthropods. She would have fame in her lifetime, although after her death she would be repudiated, then forgotten – and finally rediscovered. In some ways, in her career path as a naturalist, Merian had every advantage. She lived at a time when curiosity cabinets were bulging with weird and beautiful specimens returned from an explosion in overseas exploration and trade. Her father was a publisher and engraver whose press issued lavishly illustrated works of natural history and geography. When he died (she was three), he left her a substantial fortune. Her stepfather and her husband were both artists, and the art of the day leaned heavily on realistic depictions of nature and of still-life arrangements full of flowers, insects, and natural curiosities. In other ways, though, the stars were aligned firmly against her: she was a woman, and it was the 17th century.

Merian was always obsessed with plants and insects. As a girl, she would collect flowers and insects for her father to paint, and (along with her siblings) help with engraving and illustration. Later in life, Merian would date the origin of her serious research (with silkworm development) to 1660, when she was 13. In 1679 she published a masterful book on caterpillars, butterflies, and moths. In 1699, most astonishingly, she traveled to Surinam to study the Lepidoptera of the South American rain forest. She funded the expedition by selling 255 of her flower and insect paintings, and spent two years working ever deeper into the jungles before illness (possibly malaria or yellow fever) forced her home.

Merian differed from other contemporary natural historians in her emphasis on understanding Lepidopteran life history and development, and on connecting observations of eggs, larvae, pupae, adults, and host plants. For example, Thomas Moffet’s (1634) Theater of Insects illustrated caterpillars, pupae, and adults – but in separate chapters and without clearly connecting which caterpillar went with which adult. Merian, in contrast, worked hard to rear collected caterpillars and to illustrate the stages together (even including the parasitoids that sometimes, to her consternation, emerged instead of an adult butterfly or moth). This work was important, not least because Merian was working when most scholars still believed in spontaneous generation. Merian didn’t singlehandedly refute this (and in fact, while she argued strenuously against spontaneous generation for caterpillars and butterflies, she thought it was a possibility for parasitoids). But her meticulous observations went along with experiments by contemporaries like Francisco Redi in building the case against it.

Merian’s work in Surinam was phenomenal. Having risked shipwreck and pirates to get there, and parasites, disease, and venomous snakes to work there, she collected, studied and illustrated not just butterflies but lanternflies, beetles, flowers, toads, snakes, birds, and much more. Sometimes she hacked paths into the jungle (or had servants, or slaves, hack them for her); sometimes she felled trees to collect caterpillars from the canopy. She was probably the first European to see what the neotropical rain-forest canopy held. She filled notebook after notebook with observations and paintings, and crate after crate with specimens. 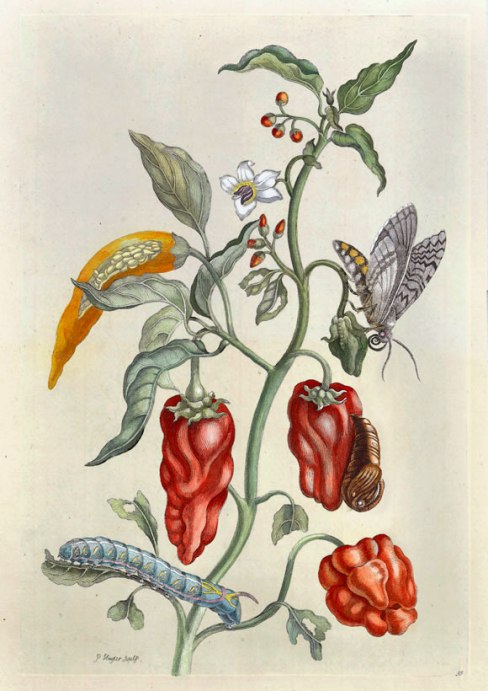 Upon returning to Amsterdam, Merian was as much of a celebrity in scholarly circles as a woman could be at the time. She was well connected in the worlds of art, publishing, and natural history. She offered her major book on the insects of Surinam by subscription, and the advertisement soliciting subscribers referred to her as “that Curious Person, Madam Maria Sibylla Merian”. Curious she was, in both senses of the word; and there were enough curious subscribers to support publication in 1705 and several further editions. Merian died in 1717. Her work was hugely influential through the 1700s: Linneaus described species based on her illustrations, and her books were widely read, cited, and admired. By the mid-1800s, though, her reputation had become checkered at best. While some great naturalists still praised her books (including Henry Walter Bates, Alfred Russell Wallace, and Louis Agassiz), others criticized her. In 1834, Lansdown Guilding published a detailed critique of her Surinam book, referring to illustrations as careless, worthless, or even “vile”, and accusing her of mistakes that should have been obvious to “every boy entomologist”. (Guilding had not actually been to Surinam, and was working from a poorly coloured edition that included plates Merian probably didn’t actually draw, but that didn’t bother him.) James Duncan’s (1841) Naturalists’ Library suggested that her illustrations were “to a considerable extent fabulous”.Still, at least in the 19th century she was remembered; for most of the 20th, she was forgotten.

Merian’s work began a well-deserved renaissance in the 1970s, when the library of the Academy of Sciences of the USSR began issuing facsimiles of her insect books. Museums displayed her paintings and told the story of her work, and she appeared on stamps and a German 500-mark bill. She’s still not widely known, but increasingly at least entomologists are aware of what she did: pioneered not just careful observation, but also the expeditions of discovery that would open up the world of natural history and the new sciences of botany, zoology, and ecology. Her accomplishments would have been remarkable for anyone who lived when she did. For a women working at a time when a woman’s interest in nature was at best eccentric and at worst redolent of witchcraft, her accomplishments were nothing short of astounding. Nobody has ever deserved more richly immortalization in the Latin names of the insects she loved.  Opsiphanes cassina merianae and Erinnyis merianae, therefore, are wonderful Latin names.

You can get a copy at your local library or bookseller, or from

*Since synonymized with E. lassauxii, or treated as a subspecies E. lassauxii merianae. **Thanks to the insect systematist par excellence Terry Wheeler for identifying these two insects as being named for Merian. Several other butterflies and moths, some beetles and some plants are also named for her, according to various frustratingly vague Internet sources. If you know of other examples, please mention them in the Comments.

By coincidence, Maria Sibylla Merian was also featured in Entomology Today’s recent (and terrfice) series on “Famous Female Entomologists”. The piece on Merian is here, but you should read the other installments too. And here’s Opsiphanes cassina merianae again, full-sized: 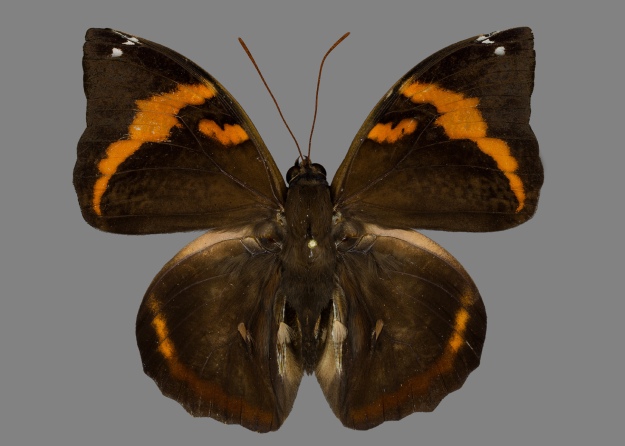