It was really fun to post Part I yesterday, but if you read it, perhaps you found it somewhat unsatisfying. Which is more or less my point, but here in Part II I’ll give myself enough room to develop the argument. The convergence of two things spurred me to write this post – one (at least on the surface) just fun; the other, a recent conversation I had about trends in modern publishing. 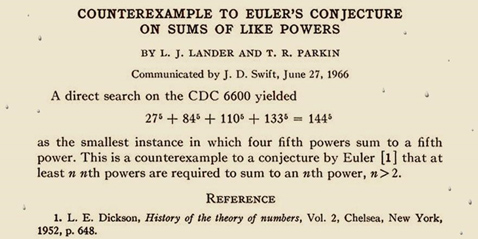 Amazingly enough, though, this is 7.5-fold longer than their original 4-word submission*:

These authors deliberately intended this to set a record for the shortest published paper**, and were annoyed with an editorial suggestion that “a line or two of explanation would really help”. They shot back, “What else is there to explain?”, and the editor consented to publish it as “boxed filler” – but moved the original title into the body of the paper, apparently without Conway and Soifer’s approval.

So, here’s the thing. I’m on record as favouring whimsy and humour in our literature – but only when they don’t compromise clarity. All these short papers are amusing, but also, all could be clearer! Take Conway and Soifer, for example. “What else is there to explain?” Well, as a start, how about what older problems the triangle-covering problem is related to, what practical application it might have***, what approaches to other unsolved problems it might suggest, or what new unexpected problems it might lead to? Even the authors seem to recognize there was more to say, as they reprinted their “paper” in Geombinatorics but added that the equilaterality of the triangles is important to the result, with n2 + 1 sufficing for some non-equilateral triangles.

I guess it’s hard to blame any of these authors, since there’s something irresistibly, geekily cool about publishing a 2-word abstract or a 4-word paper (or even a 30-word one). It was irresistibly, geekily fun for me to read them and to write about them! But as contributions to the scientific literature, they leave something to be desired. So, can a scientific paper be too short? To improve on yesterday’s answer: Yes, these ones are.

But, of course, I’m shooting fish in a (triangular) barrel. The papers I’ve discussed so far are extreme outliers – the 4 shortest I know of the millions of papers that make up our literature. What about more typical papers?

Well, that’s where the conversation I had about publishing comes in. A friend of mine was bemoaning the fact that letters-format journals, with their shorter papers, have been proliferating and climbing in impact factor. (Some of our “traditional” journals, like Ecology, are deliberately echoing this trend, reducing page limits or pushing more papers into “Reports” formats.) There are some good reasons for this trend, the most obvious being that the flood of manuscripts we’re producing just keeps growing, putting pressure on journals to publish shorter papers (and hence more of them****) and on us as scientists to read shorter ones (and hence more of them). My friend’s objection was that when he writes a paper, he wants to put into it all his thoughts on a question, and to show all the complexity in his data, but that short-paper formats don’t allow that.

This friend is someone I enjoy arguing with, so I told him he was wrong: reducing a complex dataset to a simple story is part of a scientific writer’s job, and that nobody needs to know every thought he’s had about his data. I don’t think there’s much question that this is true (although I may have exaggerated a bit for the fun of the argument). I like to read short papers even if I don’t like having to write them, and my writing book pays a lot of attention to story-finding and brevity. Writing short papers is harder than writing long ones, and so as writers, we generally need pushing to shorten things up (the roughly 1,000 manuscripts I’ve seen as a reviewer and an editor provide data to support that statement).

And yet I have the sneaking suspicion that my friend might be at least partly right. Like the amusing examples I started with, I worry that sometimes (certainly not always!) we’re seeing pressure to make papers shorter than they should be. I worry that context may suffer, and thorough connection to the literature, and measured, nuanced discussion of what a result means and how general it might be. In other words, I worry that the length that optimizes a paper’s probability of publication, readership, and citation rate may be shorter than the length that optimizes its communicative function. (I will admit that I’m not sure how to test this hypothesis.)

So, as the American Naturalist says, a paper should be as long as it needs to be, but no longer. I’ll add to that: a paper should be as short as it can be, but no shorter. The trick, of course, is figuring out which papers just aren’t right for the fashionable short-paper formats – and finding a way that these longer papers can still be published and draw readership. There may not be that many papers that genuinely need to be long, but the ones that do might be important. Perhaps we should all agree to cite at least one long paper (presumably after reading it first) in each manuscript we write?

**^Not counting this, which is unbeatable, but which is entirely a joke (as distinct from a paper about real science that makes a joke).

***^I don’t mean every mathematical problem has to have a practical application. Maybe this one doesn’t – but I suspect it does. Actually, Conway and Soifer do too, as they repurposed the problem for a math competition using the need to cover a triangular cake from the rain using smaller triangular tiles. Sure, that’s a bit artificial, but it isn’t hard to see more real-world possibilities. More generally, every mathematical problem surely has some context, whether that context is applied or not.

****^It’s often argued that online journals aren’t subject to the same length constraints as print journals, but that’s only partly true. Reviewing, editing, and production costs still scale with length. In addition, online journals care about impact as much as print ones do, and if we avoid reading long papers, even online journals will avoid publishing them.

16 thoughts on “Can a scientific paper be too short? Part II”