I’ve just come from the Skrímslasetrið Bíldudal, the Icelandic Sea Monster Museum, in the town of Bíldudalur in the Western Fjords of Iceland. It’s a wonderful little museum commemorating centuries of monster sightings in the Arnarfjörður, the fjord that cuts like reaching fingers into the land here. The tour of the museum starts at a copy of Abraham Ortelius’s early-modern (1590) map of Iceland (above), which is copiously decorated with sea monsters. Some are obviously the product of observers grappling with strange new creatures, and getting them half-right and half-wrong (like the spouting boar-whale at bottom left of centre, or the monkfish behind it). Others seem like pure fancy, like the mer-horse above and left of the whale. All, however, look fierce and threatening. 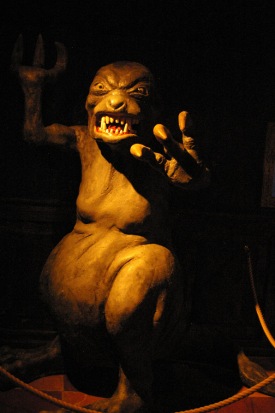 Illustrations like this were common on early maps, and they seem to have fulfilled either of two functions. In some cases they record, however imperfectly, strange things seen in an unfamiliar place. Others seem closer to warnings, labelling regions of the ocean that were totally unknown: Here be dragons. But these have in common the notion that what is unfamiliar is to be feared. Certainly the life-size merman in the Skrímslasetrið Bíldudal (right) is the stuff of nightmares. Mermen like this are said to occasionally emerge from the waters of the fjord, and clearly, their intent isn’t to find a friendly game of euchre.

Iceland is a country dense with stories of trolls, elves, sea monsters, and the like. Most Icelanders tell these stories now with a wink or an expression of bemused tolerance, but not quite all of them do; there are reported sightings of monsters in Arnarfjörður as recently as last summer. Similar stories are told around the world, from the monster in Loch Ness to the Yeti roaming the Himalayas; and few of the creatures we imagine (if, of course, we’re imagining them) are cuddly.

The unknown world is getting smaller – at least, geographically. There are no more unexplored oceans for Here be dragons*, and few unexplored jungles to have giant vampire bats (as rumoured in the depths of the Amazon rainforest) or sauropod-like river monsters (like the Mokèlé-mbèmbé of the Congo). It’s harder all the time to be seriously afraid of mermen or the grimacing monsters in Ortelius’s map. But there are other kinds of unknown worlds out there, and so other things to fear.

I’m an entomologist. Insects, therefore, are my bread and butter, and there aren’t many I’m afraid of**. But it’s not hard to find members of the lay public who know little about insects, and who are scared. I’ve met people scared of earwigs, of antlions, of bumblebees, of dragonflies, of the 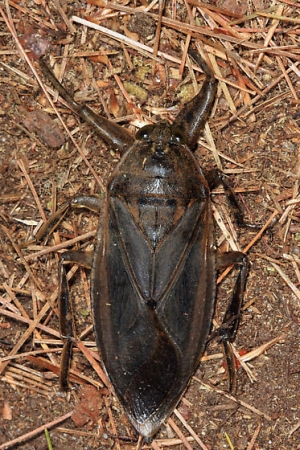 peanut-headed bug (google it; you won’t regret it), of june beetles, and even of giant waterbugs (right)***. These fears are unnecessary (except perhaps for the few with life-threatening bee-sting allergies, and that’s fear of the known, not the unknown). Take giant waterbugs, for example. They’re big (up to 7 cm long), they’re predators, they look a bit prehistoric, and when someone tells me breathlessly about an insect that scared them, it’s nearly always a giant waterbug. But they’re predators on tadpoles and minnows, not people, and you have to work quite hard before one will try to bite you. They’re also some of nature’s most devoted fathers. Their eggs are very large, but depend on simple diffusion to get oxygen to the developing embryo. For this to work, they need to stay wet (for oxygen permeability), but not be submerged (because oxygen is less available in the water). So females lay their eggs on vegetation just about the waterline, and the male tends them for weeks – spitting water on them as needed to keep them wet until they can hatch. (In the related genus Belostoma, the eggs are laid on the father’s back, and he carries them until hatching, ducking into and out of the water to keep the eggs just moist enough). And we’re afraid of these animals? Not once we know something about them, I hope; and the same goes for just about every other insect (and spider, and snake) on our planet.

Now, being afraid of the unknown is only human, and in many circumstances it might even be a pretty good idea. But staying afraid, when there are easy opportunities to learn a little about insects and to appreciate them for the beauty and fascination they offer, is a much less good idea. I feel a bit sorry for people who miss out on sea voyages because they’re afraid of mermen, and on dips in the swimming hole because they’re afraid of insects. What’s unknown can become known, and fear can become fascination.

*^Although the ocean depths are still largely unknown. If dragons have gills, perhaps they’re down there.

**^Except for an assassin bug that bit me on the knuckle when I tried to collect him from a bedsheet-as-light-trap in Belize, about five years ago. No creature has ever inflicted that much pain on me, and if that bug is still out there, you’ll find me cowering in the latrine.

***^And my friends who work on (and love) spiders and snakes will tell you the same stories – perhaps even more so.

4 thoughts on “Sea monsters, waterbugs, and the fear of what lies beyond”