Illustration by John Tenniel for Lewis Carroll’s poem Jabberwocky (Carroll 1871, in Through the Looking-Glass, and What Alice Found There). Public domain.

I’ve been reading a thesis, getting ready for the defence.  I’ve probably been an examiner (internal, external, or opponent) for close to a hundred defences, and I almost always enjoy them.  Most students do, too – at least, those who have realized that their defence is more than (and less than) an exam.  It’s a chance to share their pride in what they’ve done, and as they do so, they know more about that work than anybody else in the room. The defence is new for each student, of course, but by now they’re a comfortable routine for me.

Last year, though, I found myself an examiner for a thesis that yanked me out of my routine.  It was a creative-writing MA thesis in our Department of English.  I was very much a fish out of water, but it was an extremely interesting process and I learned a lot. 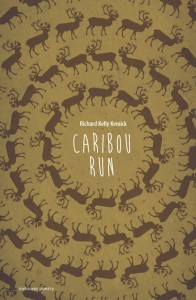 I got involved when the student, Richard Kemick, came to me and explained that his thesis would be a book of poetry about the migration of the Porcupine Herd of caribou.  (The book has since been published, under the title Caribou Run, and you can read my review of it here.)  Richard and his supervisor wanted a biologist among the examiners to ensure accuracy of the poems’ depiction of caribou biology.  I had to admit to two shortcomings. First, I’m not a mammalogist (even my titular squirrels are really just a metaphor).  Second, I know next to nothing about poetry, and feared I’d have I’d have the same reaction to any poetry that Alice had to Jabberwocky:

“It seems very pretty…but it’s rather hard to understand!” (You see she didn’t like to confess, even to herself, that she couldn’t make it out at all.) “Somehow it seems to fill my head with ideas—only I don’t exactly know what they are.” (Carroll 1871)*

Bravely, Richard decided that neither of these should prevent me from examining his thesis; and equally bravely (I think), I agreed.

Then the thesis came.  I quickly discovered that Richard knew more about caribou than I did; but fortunately, that was easy enough to rectify with some trips to the library.  More troubling: I realized that I didn’t know how to examine a poetry thesis (beyond the straightforward fact-checking of caribou references).  When I examine a biology thesis, I’m looking to see whether it constitutes good science.  Are the statistical analyses the right ones? Is the interpretation of their results correct?  Do the data support the conclusions?  Does the candidate set the work in context, explaining its significance for the field?  None of these questions seemed to work for a poetry thesis.  Were they “good” poems?  How on Earth would I know?  When applied to a poem, what does “good” even mean, anyway?

So I swallowed my pride and went over to see my faculty friends in English, and here’s what I learned**.  The defence of a poetry thesis isn’t really a determination of whether the poems are “good” (pass) or “bad” (fail).  Instead, the emphasis is on why the poems look as they do. Why does this one rhyme, but that one not? Why is this one a ghazal, but that one a tanka? (Yes, those are real poetic forms.)  Why this metaphor and not another?  What earlier literary works are referenced (implicitly, as poems don’t usually have citations), and why?  One doesn’t ask whether the poem’s metre is “correct”, but rather why the adoption of that metre helped build the impression the poet wanted to convey.  In a way, the candidate defends the creative process as much as the final product.

I suppose you could argue that biology defences cover process as well. We often ask questions about why a candidate chose one study system or experimental design or statistical test over another.  We’re generally concerned, though, with how those choices affected the correctness of the inference about nature.  I don’t see a very close connection with the choices made by poets (although I think I’ve made it clear that I’m pretty far out of my comfort zone here).

So a poetry defence is not at all like a science defence – except in one important way.  A poetry student, like a science student, should be proud to share the work, because its creation marks them as an expert producing new ways of seeing or understanding the world.  I could see this similarity even as I was marveling at the differences.  My fish-out-of-water experience made me sad that, as an undergrad, I ran so hard from engaging with the arts. But I was happy to discover that it wasn’t too late to start.

*^Of course, Jabberwocky is nonsense; Richard’s poems wouldn’t be. The problem was, I worried, that I’d be too far out at sea to recognize the difference.

**^I have, obviously, no way of knowing whether this is universally true of creative writing theses, or only of poetry theses at UNB.  If you have some experience, please share it in the Replies.

11 thoughts on “Fish out of water: a scientist examines a poetry thesis”