Photo: Lt. Worf, the Klingon Chief of Security on the USS Enterprise-D, © patrles71 via flickr.com, CC BY-NC-ND 2.0.  Worf has not named (will not name?) any species, but he could. At least one has been named for him.

If you’ve been reading Scientist Sees Squirrel for a while, you’ll know that I’m weirdly fascinated by the etymologies of species’ Latin names.  Actually, “Latin” names don’t always have Latin etymologies, and names have been derived from a surprising diversity of languages.  In fact, a while back I mentioned in passing that it would be perfectly legitimate, according to the codes of zoological and botanical nomenclature, to coin a “Latin” name from a Klingon derivation.  This, of course, raises an obvious question: has anyone? 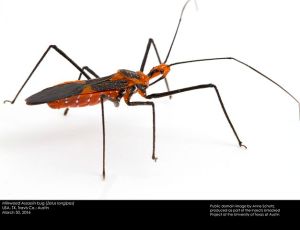 Well, I don’t think so*.  It’s not the easiest thing to search for, but my best efforts have come up empty (if you know of an example, please leave it in the Replies). This surprises me, actually – with the draining need for thousands upon thousands of names to label Earth’s astonishing biodiversity, and with the cultural omnipresence of the Star Trek universe, why on Earth (or off it) hasn’t someone come up with a Klingon species name?  Imagine, for instance, that the predatory assassin bug at right wasn’t already named Zelus longipes.  Wouldn’t Zelus chordoq (“red-bellied Zelus”**) be a pretty good name?  Surely it would.

If there aren’t any Klingon names (yet), what about names based on other fictional languages?  At least a handful of such languages have been elaborated far enough to provide possible etymologies.  For example, in addition to Klingon, Lapine (from Watership Down), Na’vi (from Avatar), Dothraki (from A Game of Thrones), and Quenya and Sindarin (two dialects of Elvish from The Lord of the Rings) all have fairly extensive vocabularies. Have systematists drawn upon this richly nerdy resource?

Yes – or at least one has, anyway. In 1978, Leigh Van Valen published a paper (Evolutionary Theory 4:45-80) reviewing early Paleocene mammal faunas, and in a pair of appendices named and described 63 new mammalian taxa.  Many of their Latin names are based on The Lord of the Rings.  Most are named for characters (Anisonchus eowynae, Bubogonia bombadili, Oxyprimus galadrielae) or places (Litaletes ondolinde, Thangorodri) or both (Fimbrethil ambaronae).  A handful, though, have “real” etymologies, mostly from one of the dialects of Elvish.  My favourites: 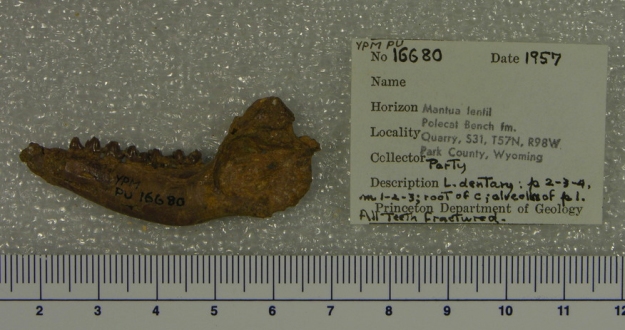 I know some will dismiss these namings as frivolous, lacking some kind of supposed scientific gravitas (the same folks probably dislike celebrity Latin names, for the same reason). But in my books, these are quite clever, and the last one (M. minuial) is even quite poetic.  At worst, it seems, no harm has been done here; at best, some Lord of the Rings fans will be delighted, and some who have not yet discovered the books may do so.

So: Elvish, yes; but Klingon, no.  This, it seems, is a situation begging to be rectified.  It is perhaps time for some Trekkie systematist to boldly go where no (hu)man has gone before.

UPDATE: Weirdly and indirectly related, here’s a 1970 proposal to use Esperanto to name extra-terrestrial species, if and when any are discovered.  Thanks to Alejandro Izquierdo for the link.

*^There is an extinct hermit crab Annuntidiogenes worfi, but that’s named for a Klingon person, not from the Klingon language.  There are plenty of similar namings-for-fictional-people, but they aren’t what I’m looking for here.

**^Klingon chor (belly) + Doq (red). There would be some complications to Klingon derivations.  For example, many Klingon words include an apostrophe, which is not allowed in the codes; and q and Q are different letters but would both have to be represented as q in a species name.  These should not be insurmountable obstacles; derivations from other languages have overcome similar issues.

11 thoughts on “Are there any Klingon “Latin” names?”