Note: This is a science outreach piece belonging to a series I wrote for the newsletter of the Fredericton Botanic Garden.  I’d be happy to see it modified for use elsewhere and so am posting the text here under a CC BY-SA 4.0 license. If you use it, though, I’d appreciate hearing where and how.

Autumn has arrived, and that brings fresh pleasures to a walk in our Garden: fall-blooming asters and goldenrods, the first tinges of fall colour in the trees, and (less obviously) fungi.  While you can see mushrooms and their fungal relatives almost any time of year, the fall is their peak season. If you train your eye just a little, you can see an amazing diversity of forms, and beauty to rival anything the plant kingdom has to offer.

Fungi were once considered kin to plants, and are still often taught in “botany” courses, but we now understand that they’re really more closely related to us (and the other animals).  That longstanding mistake was understandable, as in many ways fungi are ecologically rather plant-like.  For example, they’re immobile except for spores dispersed by wind, rain, or insects, and they depend on a vaguely root-like network of resource-gathering filaments in the soil (or other substrate).  You can see, at least, how we were led astray.

Those resource-gathering filaments, or “hyphae”, are the part of the fungus you don’t see, but they completely change your view of what a fungus is.  The mushroom that catches your eye is just the very tip of the iceberg – a reproductive structure thrust up above ground (or projecting from some other substrate) to disperse the spores. The bulk of the fungus, and the longer-lived part, is its hyphal network, which harvests resources to support the whole fungal body.  That “whole fungal body”, by the way, can be immense: a single genetic individual of the honey-mushroom fungus, in Oregon, is 2400 years old, nearly 4 km across, and likely weighs hundreds of tons.  Its many thousands of spore-bearing mushrooms are interconnected by a system of hyphae that, if disentangled, could easily circle the globe. 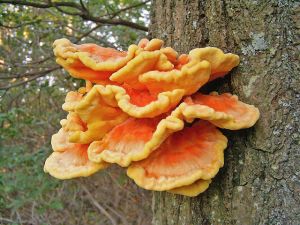 Most of our familiar fungi make a living in one of two ways, and our world would be unrecognizable without either group.  First are the decomposers, like the chicken-of-the-woods at right.  These colonize dead (or dying) wood, and decomposer fungi are almost the only organisms on Earth capable of digesting the main components of woody tissue: cellulose and lignin.  Without these fungi, we could never take a walk in the woods – because the accumulated woody debris would choke the forest floor.  Those woods wouldn’t exist at all, though, without the other group: the plant-symbiotic “mycorrhizal” fungi.  The mycorrhizal fungi, like the yellow fly agaric at the top of this article, wrap their hyphae around and into the roots of nearly all plants.  (There are two major groups: one makes visible mushrooms, associates primarily with trees and shrubs, and is by far the most diverse; the other is cryptic, associates primarily with herbaceous plants, and is much less diverse but equally important.)  The fungus, through its hyphal network, gathers soil nutrients and passes them to the plant, while the plant ships as much as a third of its photosynthetic sugar to the fungus in exchange.  Without this partnership, it’s doubtful if plants could have colonized dry land at all, let alone have covered our planet in its beautiful cloak of green.

I did say most of our fungi are either decomposers or mycorrhizal.  Two more groups bear mention (although they don’t exhaust the list of fungal lifestyles).  You know one: the lichens – or rather, half of each lichen.  Lichens are symbiotic associations of fungi with algae or with photosynthetic bacteria.  The fungal partner provides its algal partner with nutrients and shelter, and receives sugars in return.  Although it turns out, it’s more complicated than that.  Just this year we’ve discovered that many if not most lichens involve two fungi, not one – and we don’t yet know what role the second fungus plays. 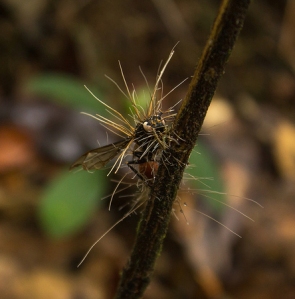 But I’ve saved the best for last, with a fungal lifestyle you may not know.  The fungus at right is one of thousands of species of Cordyceps, which grow as parasites on insects (here, an unfortunate fly).  The fungus begins growth as a few hyphae inside the living insect.  It eventually fruits and kills its host (the yellow bristle-like structures around the fly are the fruiting structures, tipped with spores).  First, though, many Cordyceps species alter their host’s behaviour, steering the doomed insect to high ground – all the better for dispersal of its wind-carried spores.

You can see all of these fungal groups – and many species of each – in a walk through our Garden. So yes, we have lovely plants in our woods and in our planting beds; but don’t miss the fungal action without which neither could exist.  And be impressed (if you aren’t just a tiny bit creeped out) by evolution’s ingenuity: from mammoth, thousand-year-old decomposers to horse-trading symbiotic partners to tiny brain-controlling parasites.  Fungi do all that, and more.

7 thoughts on “There’s fungus among us”