Warning: mostly navel-gazing, albeit with some thoughts about SciComm and the openness of science.

I didn’t know much about the blogosphere before Scientist Sees Squirrel was born. Turns out maybe I still don’t, since I’m asking the rather obvious question in the title of this post.

So is Scientist Sees Squirrel a “science blog”?  Well, it’s about science (inasmuch as it’s about anything), so in that sense, surely the answer should be “yes”.  But I’ve just read Science Blogging: The Essential Guide, and according to that book, the answer is pretty clearly “no”.  This surprised me a little, but it also crystallized something I’d been wondering rather vaguely about anyway: what is, and what should be, my audience here? 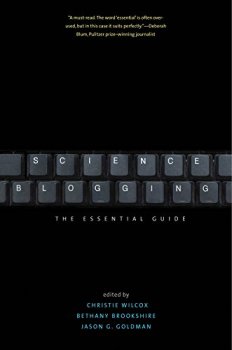 First, the book*.  I was quite excited to discover it, as I very much enjoy writing Scientist Sees Squirrel but I’m also well aware that I still have a lot to learn about blogging.  I’m not sure I got a lot out of Science Blogging, though.  That’s not a dismissal of the book – not at all.  In fact, I wish it had existed when I started blogging; it would have helped me greatly in conceptualizing and creating Scientist Sees Squirrel. The book’s subtitle is almost perfectly descriptive: it may not be an “essential guide” (nothing is), but it’s an excellent “guide to the essentials”.  Its 26 chapters cover things like benefits (and costs) of blogging, mechanics of setting up a blog on the web, finding and using license-appropriate images, building an audience, and blogging about controversial topics.  There are a few surprises, too; I didn’t expect chapters on the ethics of blogging, on personal storytelling, and on blogging as a tool to diversify science (these unexpected chapters were the ones I learned the most from).  Most of the chapters are short and breezy, making the book an easy and very helpful read for someone deciding whether to start a blog, or what that blog should look like.  The same brevity (which makes a few chapters seem a bit superficial), I think, makes the book less useful for an established blogger.

But back to my question.  Is Scientist Sees Squirrel a “science blog”? Not according to Science Blogging.  Oddly, the book never defines “science blog” explicitly, but the implicit definition is very clear: a science blog is one that communicates science to non-scientists (thereby doing “SciComm”).  That’s not my primary goal for Scientist Sees Squirrel, although I do have two series of posts that fall into the SciComm category.  The first is a series I write for the newsletter of my local Botanic Garden; I post them here incidentally, licensed for re-use by anyone who would like to do so. The second is my series on “Latin”, or scientific, names of organisms – especially my Wonderful Latin Names posts (which could be read, I think, equally well by scientists and non-scientists). These two series make up a small minority of posts on Scientist Sees Squirrel, and an even smaller minority of page views**.  Most of what I write is intended to interest scientists, and has to do with the community and process of science: writing, publishing, speaking, statistics, teaching, the nature of the university, wrong turns, the thrill of discovery, and so on.  So, I guess Scientist Sees Squirrel is a science-community blog, rather than a science blog, if it has to be one or the other***.

The science-blog/science-community-blog distinction raises an interesting question, to which I don’t have an easy answer.  How much should our science-community discussion be open (written with the intent that it’s read by non-scientists too) – and how much can it be?  On the one hand, I completely understand if some of my more technical posts aren’t of much interest to non-scientists.  Maybe that just reflects how I chose to write them, but I don’t think that’s entirely so; instead, there are issues of interest to scientists that may just be intrinsically uninteresting to anyone not in the field.  On the other hand, though, I worry about society thinking of science, and scientists, as somehow standing apart.  The more we talk primarily to ourselves, the more we foster the impression that we’re secretive, or cabalist, or inaccessible. Is this unfair? Absolutely – nobody worries if lawyers have law blogs written for other lawyers, or theologians have theology blogs written for other theologians.  And I don’t want to overstate the issue; only the rabid fringe of the paranoid right actually thinks global warming (for example) is a conspiracy****.  Surely it’s entirely appropriate for some of our communication, as scientists, to be aimed at each other.

So most of the time, I picture other scientists as I write, and I’ll continue doing so.  I’m pleased to have some non-scientists among my regular readers (Hi, Uncle Jim!), and I hope that more will stumble across my science-community posts as a result of visiting one of my SciComm posts. I’ve seen suggestions that writing deliberately for non-scientists, with less complexity and less technical vocabulary, is a mark of respect for that audience.  I’m not convinced that’s always true.  It seems to me that it could be just as much a mark of respect to welcome non-scientists while assuming that among them are those interested in and capable of following the kind of conversations scientists have.  So if you’re not a scientist: please stick around; and if something isn’t clear, feel free to ask.  If we erode the distinction between a “science blog” and a “science-community blog” just a little, that’s fine with me.

*^Full disclosure: Yale University Press sent me a complimentary copy.  I made no commitment to blog about it, or for that matter to like it (or to say so).

**^They are among my least popular posts – especially the more “pure outreach” Garden posts.  So, of course, I’m going to stop writing them write whatever the heck I want to regardless.  Actually, I’m doubling down on my Wonderful Latin Names posts: not only am I going to write more of them, I’m developing them into a book proposal. I’m convinced they have an audience, even if they haven’t entirely found it yet.

***^There are hundreds, doubtless thousands, of such science-community blogs.  In my own field, for example, some excellent ones include Dynamic Ecology, Small Pond Science, and Ecology Bits.  It’s odd to see such a vital portion of the blogosphere completely ignored by a book called “Science Blogging: The Essential Guide”.

****^Trust me. We’re just not that good at conspiracies.