Photos: Artificial moths from @mothgenerator; thanks to Katie Rose Pipkin for permission to reproduce them here.

So, a couple of weeks ago, Jeremy Fox over at Dynamic Ecology nerdsniped me with this link to the Moth Generator twitter account.

If you haven’t seen it, Moth Generator is a clever bot that constructs fictional moths by (somehow) recombining a library of graphic generation rules. For an entomologist and a nerd, like me, this is completely fascinating.  If you’re either or both, I recommend that you check it out.

Jeremy’s nerdsniping of me is based on my well-known fondness for the interesting etymologies of Latin names – see, for just a couple of examples, here and here.  But I’m going to let Jeremy down.  While Moth Generator does provide both common and Latin names for its autogenerated moths, the Latin names are (as I understand it) constructed by combining elements of existing Latin names; as a result, they don’t have much backstory to write a post about.

There’s another functionality to Moth Generator, though.  If you tweet a word or phrase to it, it will add “moth”, use that as a common name, and construct a matching species.  (Unfortunately, such response-generated moths don’t get Latin names.)  My path was clear.  I generated a “Dynamic Ecology moth”: 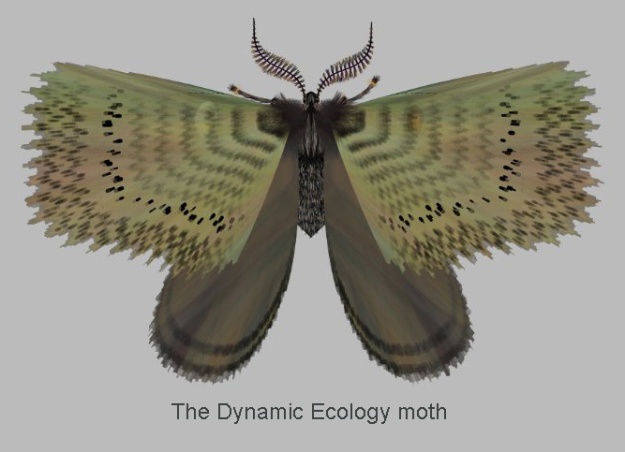 Then I generated a “Scientist Sees Squirrel moth”:

Now, I don’t know how the moth-generation algorithm works, and there’s surely lots of randomness involved – but I do know that people read tea leaves, tarot cards, and disturbing preparations of the entrails of goats.  So I’m up to the challenge of “reading” the blog moths.

2 thoughts on “On being nerdsniped by Dynamic Ecology”