People often ask me how the book is “doing”.  I’d love to know the answer to that!  It’s sold somewhere between 2,000 and 3,000 copies so far, but I have no idea whether that’s a little or a lot.  As scientists, we don’t publish books much, so I don’t have anything to compare it to, the way I do with citation counts for a paper.  Its online reviews (collected here) are mostly positive**, which I suppose is something, although such things should always be taken with a grain of salt. What means more to me is that people sometimes approach me at conferences, or email me or tweet me, to say that The Scientist’s Guide helped them.  At my most recent conference, one person told me she would never have finished her thesis without the book.  Even knowing that the phrasing was certainly hyperbole, that made me feel very good.  Another person (francophone) praised my chapter on Writing in English for Non-Native Speakers – and as that was the chapter I knew the least about, I was particularly pleased to know it came out OK.  And so far, nobody has objected too loudly to my arguably excessive fascination with Robert Boyle and the early days of modern science and the Royal Society…

I’ve learned a lot about the world of books.  My university’s Department of English hosted a book launch for The Scientist’s Guide along with my friend Randall Martin’s Shakespeare and Ecology.  When they told me they were going to do this, my first question was “what happens at a book launch”?  When they told me there would be beer and snacks, I felt like I could handle it.  When they told me (two days before the event) that I’d be expected to read a passage from the book, I was a little startled!  Alex Bond suggested (sarcastically but very amusingly) that I “do the bit about the comma”; but instead I read from my second chapter, which makes the very simple argument that for most scientific writers, writing is a craft and not a matter of natural ability.  I managed not to embarrass myself.

One of the more interesting things that’s happened is that I’ve discovered that people (for example, Jasmine Janes) like to have me sign their copies:

This seemed quite odd to me at first, although I’ve adapted, and if you’re one of those people you’re welcome to find me and ask!  I’ve also discovered that I really enjoy the similar but opposite interaction: seeing what I call “book selfies”.  People share photos of The Scientist’s Guide in their hands, in their offices, or in their homes, and I love it.  Here are three of my favourites.  First, Pat Schloss bought 10 copies to equip his whole lab: 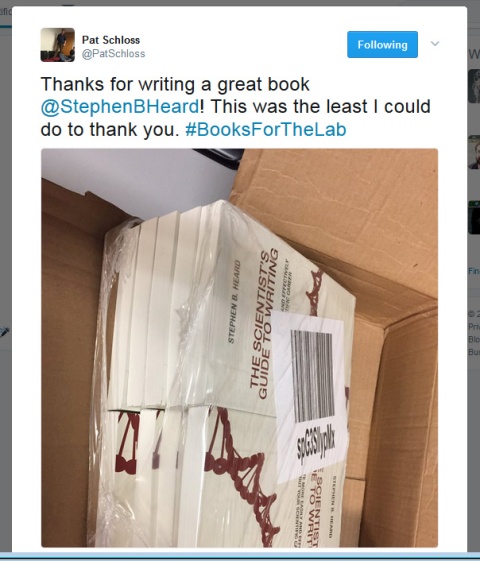 Next, one of my very oldest readers (courtesy of Deborah Mayo): 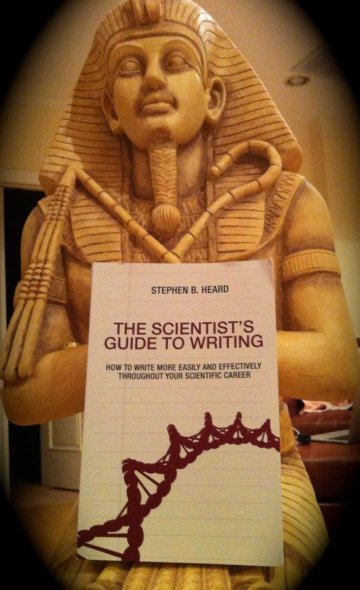 And finally, one of my very youngest readers, via Rob Johns: 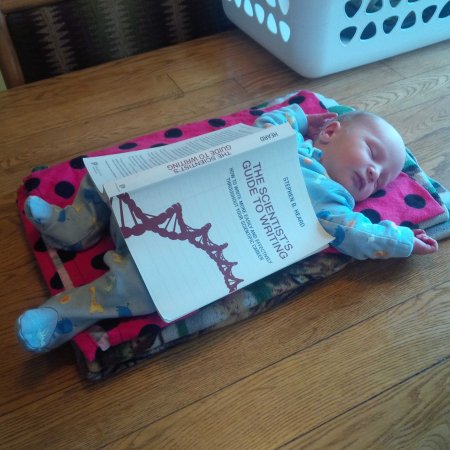 It took me 5 years (albeit not full-time) to write The Scientist’s Guide.  Was it worth it?  I’ll never get rich from the royalties; but the book seems to be helping a few people, which was always the point.  I’m content with that.  Happy Birthday, Scientist’s Guide to Writing!

Thanks to Jasmine Janes, Pat Schloss, Deborah Mayo, and Rob Johns for permission to use the images here.

*^Or thereabouts.  The official publication date was April 20, but it was available a little earlier in the US, and a little later elsewhere.  I’m celebrating its birthday now because (1) this is about when it showed up in Canada; and (2) this is when I remembered.

**^Although one reviewer on Amazon.ca wrote “Not much good…The author tends to drone on about unimportant examples that have nothing to do with concise scientific writing…”  I’m forced to wonder if (s)he was reading Scientist Sees Squirrel by mistake.  Seriously, though, no writing book will work for everybody, so there’s no surprise in having a negative review.  The surprise is that (s)he still gave it two stars.  How badly would a book have to stink to get just one?

9 thoughts on “The Scientist’s Guide to Writing is a year old!”