I’ve been reading (OK, I’m always reading, except when I’m writing).  This time: David George Haskell’s The Songs of Trees.  Here are some thoughts. 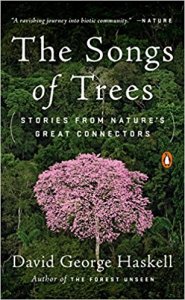 It’s an interesting book and not quite what I imagined.  The book is, as one might think from its title, about trees – except that really, it isn’t.  Each chapter is nominally about an individual tree – sometimes in the remotest rainforest, sometimes on a city street.  But Haskell uses these trees as a device to write about the interconnected nature of our world.  He writes about natural ecological networks, and also the way human lives are inextricably knitted into those ecological networks.  In his words:  “These trees’ lives and ours, past and future, are twined” (p. x).  This message is an important one, and it’s an easy one for an ecologist (like me) to relate to.  Haskell makes his networking point over and over, and I particularly liked this longer enunciation of it:

When the trunk falls, this individual [fir tree] will pass away, a biological atom with a beginning and an end.  But like all trees, the fir’s separation is also an illusion, seen only when we tilt our heads one way.  Every needle and root is a composite of plant, bacterial, and fungal cells, a weave that cannot be unknotted.  The singular fir embryo was planted by a bird whose feathers were a sheen of bacteria, whose gut was a microbial community, and whose context was a cultured society…”  (and on at length).. “The fir’s life is a relationship.  Tilting our heads way from the atom, it seems that life is not just networked; it is network (p. 45).

And yet this snippet gives a bit of a misleading picture, because it’s focused on the tree as a natural network.  That underrepresents the book’s concern with the inclusion of humans, and human activity, in the network – including both our impact on the network, and the network’s impact on us.  It was hard not to see a connection between Haskell’s thoughts and writing and those of Thoreau and Emerson 150 years earlier.  I don’t know if Haskell would agree with that linkage, although he might appreciate the notion that the world’s literature is a network, too.

Haskell’s writing is rich in analogy and metaphor.  For example, cyanobacteria “use sunlight to weld carbon into sugar, bubbling oxygen from their brazing torches” (p. 42), and the city of Jerusalem “has grown like an olive tree…supplied with a hidden system of water vessels that must be continually revised” (p. 219).  This can make his writing lyrical, and I found many passages to be simply beautiful.  For example,

But in hiding the stolen loot through the forest, chickadees and other birds lodge fir seeds in rotting logs and other prime seed beds. In winter many of these seeds are recovered and eaten, but some are forgotten.  Bird memories are therefore a tree’s dream of the future (p. 35).

But in other places, I found the writing became a bit topheavy for my taste.  While I like a good physics metaphor, “Nuclear fusion pounds its energy on my eardrums, courtesy of life’s irrepressible urge to turn sunlight into song” (p. 50) was too much for me, as was “Newtonian spheres trace rings through the void.  Earth and Moon hoop the Sun, setting the earthly rhythms of day and night” (p. 59).    And some constructions seemed to just be trying too hard: “Cameras shoot the ack-ack of their pixel flak at the stump” (p. 139).  In a short essay, these would have seemed minor sins, but as their weight accumulated over the span of the book, I found myself tiring a bit.

Style, though, is personal; and what was a little too much for my taste could well be just right for yours.  If you like writing that’s a little less straightforward, a little more evocative, than your average nature essay, then The Songs of Trees may well sing for you.  The praise it’s received from many quarters suggests that it sings for a lot of people.

The Songs of Trees is David George Haskell’s second book.  His first, The Forest Unseen, is in my queue to read.

7 thoughts on “The Songs of Trees (review)”