Image: Max atop the tallest tree.  Detail from The Tallest Tree in the World.  Read on.

If you’ve been hanging around Scientist Sees Squirrel, you’ve no doubt noticed that I’ve written a book – The Scientist’s Guide to Writing.  I’ve been telling people it was my first book (and that I’m now working on a second one), and I even wrote a humongously long post about how I had no prior experience with book-writing.

But then I made a discovery.  There, shoved onto a bookshelf in my son’s bedroom with a bunch of children’s books left over from my own childhood, I found a copy of The Tallest Tree in the World: written and illustrated by yours truly.  And today, I’m going to share it with you.  No particular reason, really.  It’s not for posterity. I’m quite confident that future scholars are not going to dissect my life’s oeuvre to write dissertations about my evolution as a writer.

I don’t remember The Tallest Tree in the World at all, but it was obviously a school project, and based on the dedication, it must have been a Grade 5 project (or possibly a Grade 6 one).  So 10-year-old me wrote it.  52-year-old me finds it simultaneously amusing, cringeworthy, and kind of cool.  52-year-old me also can’t help providing a little critical commentary.  So here goes. 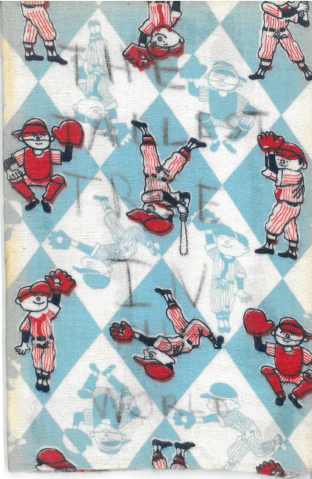 The cover design hasn’t aged well.  OK, it was pretty dubious to start with.  In 1976, though, that fabric probably made some pretty stylish pyjamas. 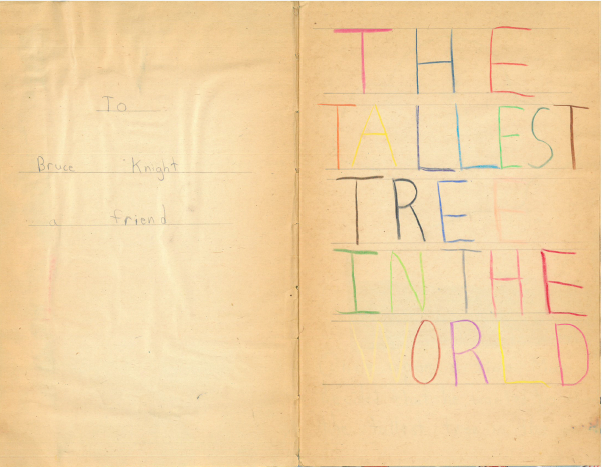 The dedication is a little cringeworthy, but at least it lets me (roughly) date the book.  And guess who was a little too happy with his 64-colour pencil-crayon set? 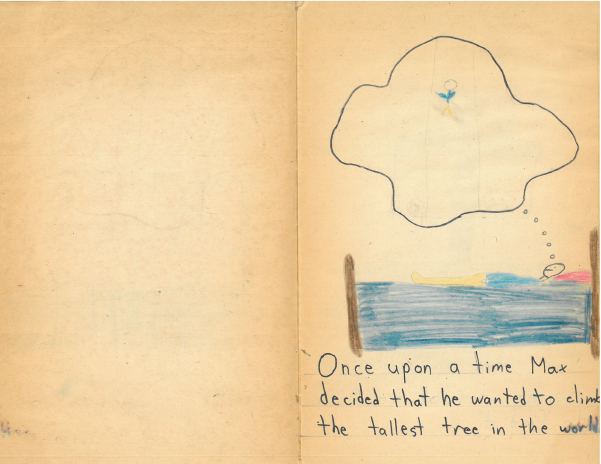 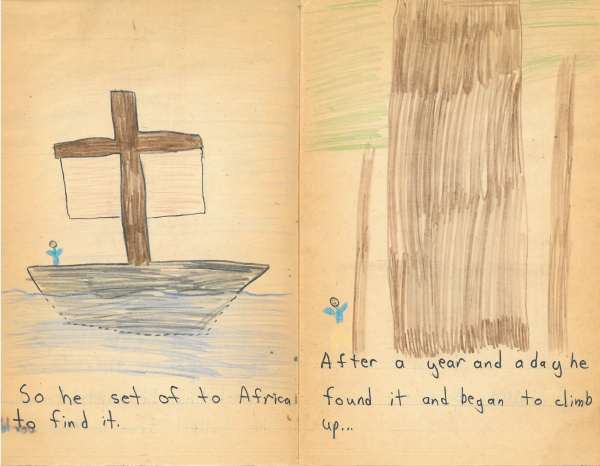 No waiting around to get into the action here.  But why did I have Max head for Africa?  If Wikipedia had existed in 1976, Max (or I) could have checked and found that only one African tree appears on a list of the 25 (documented) tallest trees in the world – and it’s down at #21.

Oh, and about that sailing ship.  Not great even for 10-year-old me, is it?  Well, when my son was a toddler, he was scared by the mirror on the closet door in his bedroom.  So together we drew and coloured a big poster to cover it up.  One panel is a sailing ship.  45-year-old me drew it, and it’s not noticeably better than Max’s ship. 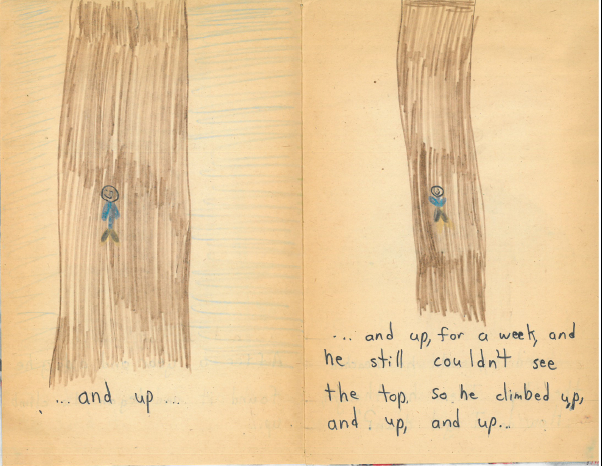 How, exactly, is Max gripping the tree?  And what’s he eating and drinking for a week on the trunk of this tree?   Enquiring minds want to know. 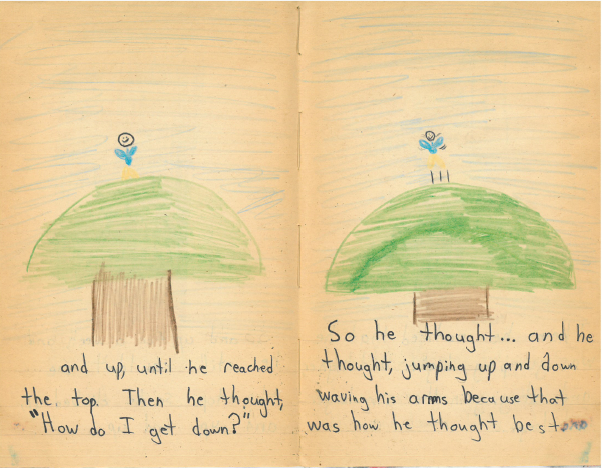 “Because that was how he thought best.”  Little deux ex machina there, 10-year-old me?  But turn the page to see how it resolved a sticky plot point, because somehow I had to get Max down again… 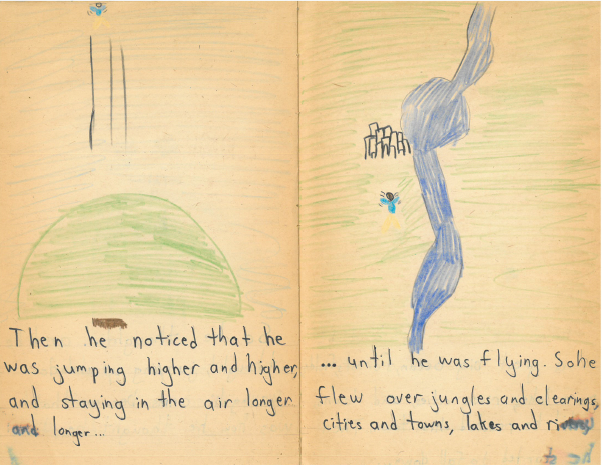 And that river… that river looks quite a bit like somebody’s digestive tract. 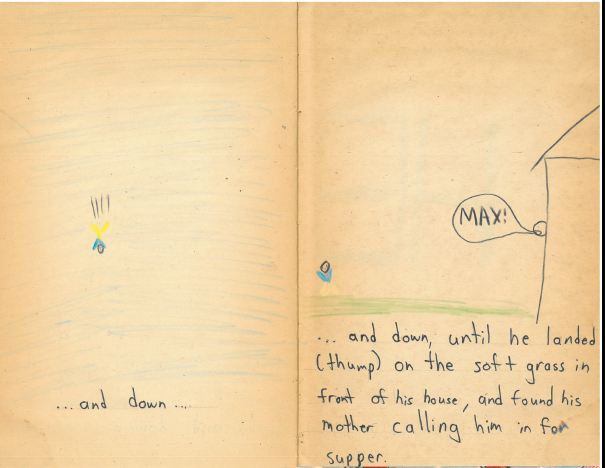 Don’t Max’s arms ever get tired, given that he seems to walk about everywhere holding them up in the air?  I don’t think I knew how to draw arms any other way. (OK, you can argue I didn’t know how to draw arms that way.) 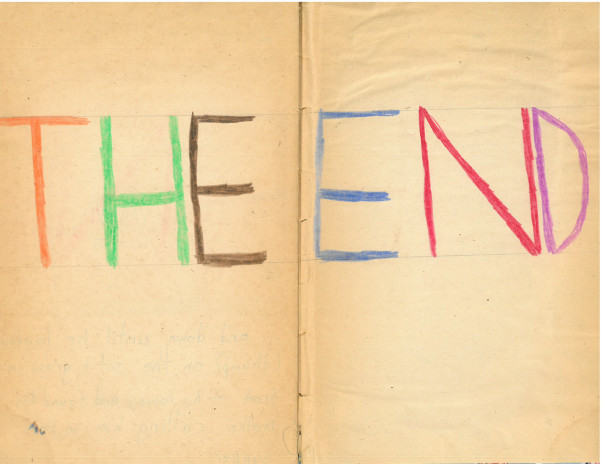 Good thing there are only six letters in “The End”, or I’m sure I would have succumbed to the temptation to use the whole 64-colour pencil-crayon set again.

So, there you have it.  The illustrations are crude, and the plot is paper thin; but here’s the thing: it’s not horribly written.  The sentence structure is nicely varied, there’s some interesting rhythm, and despite the thinness of plot there’s a narrative arc.  I’m not as horrified as I thought I might be when I picked it off the shelf.  I’ll leave it to others to decide whether there’s a continuity of voice with my later works.  (Wait, no, that would be the dissertation I’m quite confident is never going to be written.)

Raise your hand, though, if you’re relieved I didn’t use my 64-colour pencil-crayon set to illustrate The Scientist’s Guide to Writing?  Yeah, me too.

3 thoughts on “Turns out “The Scientist’s Guide to Writing” was not actually my first book!”