It caught my eye, and the media’s, last month: an announcement that the American Ornithological Society would be changing the “official” name of the North American corvid Perisoreus canadensis from “Gray Jay” to “Canada Jay”.  The grey/Canada jay* is a wonderful bird – handsome, intelligent, and inquisitive – and “grey jay” sells it short, so I’m completely down with using “Canada jay”.  But: the notion that there’s any such thing as an “official” common name, or that the AOU gets to say what it is, is deeply weird. 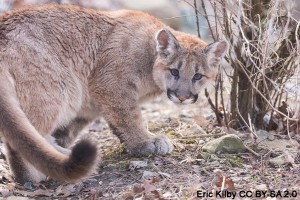 To be fair, it’s not just the AOU.  The Entomological Society of America maintains an official common names list, too, and I’ve no doubt there are others (if you know of one, please tell us in the Replies).  And as long as you don’t think too carefully about it, you can see why people might try this. Common names, to a biologist, have three major flaws.  First, a single creature may bear many common names: the single New World wild cat pictured here has at least 40 different English names (cougar, puma, catamount, panther, painter, mountain screamer, mountain lion, and many more**).  Second, a single common name can refer to many creatures: a robin is an entirely different bird in Europe and North America; a fruit fly can be any of several thousand species in at least two fly families, and a daisy can be almost anything.  Third, many species lack any common name at all (probably, for example, the great majority of insects).  So wouldn’t it be nice if someone were in charge of the language, and could fix it so that each species had one and only one common name?  Then, the AOU and the ESA are thinking, we’d unambiguously know what we’re talking about when we use a common name.

But here’s the thing: these “official” common names lists are attempting the impossible, in aid of the unnecessary.

Impossible, because there’s no real sense in which these lists of “official” common names are actually official.  Nobody is in charge of the English language, least of all the AOU or the ESA.  These bodies can and do enforce use of their “official” common names in their own documents and in papers published in their own journals, but that’s all they can do.  Otherwise, common names are just like all other English words.  Each word is a convention between writers and readers (or speakers and listeners); and the “right” common name is the one that most writers and readers agree on.  These word conventions are arrived at informally, not by fiat; and they shift through time and space and depend on the age or background of the writer or reader, the degree of formality being used, and so on.  If that’s sometimes confusing, well, you can wring your hands over it, or gnash your teeth, but no official proclamation will change it.  That’s what makes a common name a common name.  That’s how human languages work.

Fortunately, if standardizing common names isn’t possible, it also isn’t necessary.  That’s because attempts at “official” common names are attempts to solve a problem that’s already been solved, perfectly satisfactorily, and has been for hundreds of years.  The problem of ambiguity in naming is precisely the reason for our system of Latin (or “scientific”) naming.  One name for each species? Check.  One species for each name?  Check.  A system of rules to ensure those first two things?  Check.  So: if you want to speak unambiguously about the Canada jay, it’s Perisoreus canadensis.  Cougar?  Puma concolor.  And of course the maintainers of “official” common names lists know this – because their own lists achieve nonambiguity only because they’re pinned directly to the Latin names.  Each “official” common name is (if it’s anything at all) a 1:1 synonym for a Latin name.  In other words, “official” common names add nothing to the naming system we already have.

I’m not arguing that, as scientists, we shouldn’t use common names.  There’s a very powerful use case for them: they’re often shorter and easier to read than the Latin names.  (Sometimes very much so.)  Even in a scientific paper, it’s often a kindness to the reader to use the Latin name once, and a common name thereafter.  But nothing about this requires any universal agreement on what the “official” common name is.  Any ambiguity is quickly and easily handled by a simple definition early in the paper, such as “Griseotyrannus aurantioatrocristatus (henceforth, the crowned slaty flycatcher, or CSFL)”, or “Griseotyrannus aurantioatrocristatus individuals (in this paper, just ‘flycatchers’)”, or some similar construction.  And if Smith’s paper uses “flycatcher” to mean Griseotyrannus aurantioatrocristatus, while Jones’s uses “flycatcher” to mean Empidonax minimus, no harm is done because the pinning to the Latin name in each paper resolves any confusion.  It’s exactly the same pinning the “official” common names use – just without the fantasy that we can somehow require that pinning to be universally1:1, or that doing so would help us somehow.

Look, I know this isn’t the issue that’s going to bring down modern science.  I’m not even sure it’s worth the 1,000 words I’ve just written about it.  But it’s just so obviously silly. Can we stop being silly?

**^Those are just its English names, though; it also has names in French and Spanish and Portuguese, Nuu-chah-nulth and Q’echi’ and Urarina, and dozens of other languages besides.