I’ve been tweeting these books as I finish them using the hashtag #AYearOfBooks, but tweets are constrained to be very short and are inconveniently impermanent.  So, I’ll collect them here, with slightly less “mini” minireviews, as occasional blog posts.  This is the beginning: seven books in January and early February.*  Expect similar posts every month or two. (For those who aren’t interested: they’ll be easily ignored.)

Rosewater (Tade Thompson, 2016). This is a science-fiction novel (first in a trilogy) that’s both conventional (aliens-set-down-a-base-on-earth-and-puzzle-us) and unconventional (they set down the base in Nigeria, not the White House lawn, for starters).  The hero, Kaaro, is intriguing: an ex-criminal with psychic skills working for a branch of the secret police.  An antihero of sorts, I guess, but one in pursuit – probably – of some good.  Rosewater is an interesting read from a fresh voice in SF; but I found myself a bit unsatisfied, wanting more about the aliens and less secret-police skulduggery. (The story of the aliens did come; it just took 300 pages.)  Will I read the other books in the trilogy?  Probably, because the voice and setting are so interesting.  (As an aside: am I the only one who finds novels written in the present tense a little annoying, with an unnecessary, frenetic. air of urgency?) 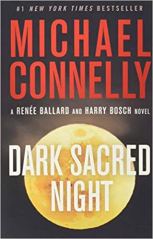 Dark Sacred Night (Michael Connelly, 2018). This is the 21st mystery/thriller featuring Harry Bosch, once an LAPD detective but now sort-of-retired but working cold cases.  (It’s also the 2nd book with a new-ish character, detective Renée Ballard). Bosch’s working philosophy is “everybody counts, or nobody counts”, and in this novel he takes on a 9-year-old, forgotten murder of a young runaway sex worker. Connelly’s books are always tightly plotted and easy to read, but that doesn’t stop Bosch’s character from being complex and drawn in detail. Ballard is an interesting addition – I haven’t gotten to know her well yet, but will definitely read the next books.  Connelly is one of my half-dozen favourite crime writers, and after 21 books the Bosch series isn’t stale.

The Little Old Lady Behaving Badly (Catharina Ingelman-Sundberg, 2016). Third in a series of comic crime-caper novels starring the League of Pensioners, a gang of octogenarian bank robbers, art thieves, and con artists.  They steal from the rich and give to the poor – mostly to the elderly poor, in various rather creative ways. This is a frothy book that runs more to events than to a sustained plot, but the characters are fun and their exploits are amusing.  The English translation sometimes struck me as a little stilted (translation must be a very difficult thing!).  I wish I could read Swedish to get a feel for the original, but the few words I know would not get me far with that project.

The House of Months and Years (Emma Trevayne, 2017).  One of my great pleasures is children’s literature – some, remembered from my own childhood; others, newly written since.  The House of Months and Years is a wonderful book.  It begins with a familiar trope: 10-year-old Amelia has to move away from friends and into a new, very strange house she doesn’t at first like.  Where the story goes from there is at once beguiling and sinister, and so imaginative I don’t want to spoil any of it for you.  I will reveal this: Amelia’s favourite book is the dictionary, and she revels in new words that fit things precisely: brocade, and verdant, and petrichor. The book would have grabbed me hard enough without that; but with a heroine who shares my love for language it was impossible to put down. 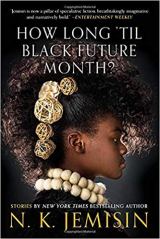 How Long ‘Til Black Future Month (N.K. Jemisin, 2018).  Jemesin is the author of some absolutely astounding novels, especially the Broken Earth trilogy (which, if you haven’t read, shut down this blog immediately and go read it).  How Long ‘Til Black Future Month is a collection of stories – science fiction, urban fantasy, etc. – that shows Jemesin’s same concern with people who have power and ability beyond their sociocultural contraints.  I will resist picking a favourite story; but I like to cook and I absolutely loved L’Alchimista, which relates an encounter between an obscure but brilliant cook and a mysterious man with a sack of even more mysterious ingredients. The closing story, Sinners, Saints, Dragons, and Haints, in the City Beneath the Still Waters, might have been even better: an urban-fantasy encounter in Katrina-flooded New Orleans. I’m waiting impatiently for Jemesin’s next novel, The City We Became, due out in March.  (Thanks goodness it’s a week after my own new  book – if I could only be excited about one new book at a time, it would have to be Jemesin’s). 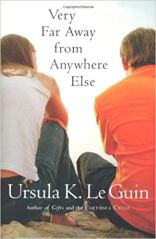 Very Far Away From Anywhere Else (Ursula LeGuin, 1976).  I have a small shelf of books I re-read often, and this book is on it.  It’s just a novella, and surely the most obscure of LeGuin’s books, but like everything she wrote it’s perceptive.  It’s a high-school-coming-of-age story for young adults.  The protagonist, Owen, is growing up as an introvert, belonging to none of the groups that young people cling to as identities, and he’s (on-the-nose alert) a science nerd.  He befriends a young woman who wants to be a composer, and the awkward but beautiful story brings them together.  It’s sappy, I suppose, but sappy in a way that LeGuin could infuse with a lot of truth. In the book’s last sentence, Owen “stood there and did the human act as well as possible”, and I know what he means.

Drums of Autumn (Diana Gabaldon, 1997). This is the 4th instalment in the Outlander series, a time-travel-historical-romance-adventure pageturner. I have a confession to make. Last fall, I started to read the first book only out of a sense of duty: Gabaldon had kindly blurbed my own new book, and I felt guilty that I’d never read any of hers.  I had the preconception that the Outlander books were romances written for a demographic rather different from my own.  I suppose I wasn’t actually wrong about that; but I was very wrong in thinking, as a corollary, that I wouldn’t enjoy them.  About 75 pages in I realized I was hooked.  Drums of Autumn follows the protagonist couple, Claire Randall and Jamie Fraser, as they settle in 1770s North Carolina.  No more plot spoilers (although as I argued here, the obviousness of many plot “spoilers” has a useful lesson for us about advice).  My only beef about these novels: at 1,000 pages plus, an Outlander book makes a rather loud ‘thud’ when you nod off holding it and it drops to the floor. Which happens, because one doesn’t want to stop reading.

There’s your first instalment of #AYearInBooks.  I’m starting the next book tonight!

Image: Pile of books © Raoul Luoar CC BY 2.0 via flickr.com

*^Someone will inevitably ask “how do you have time for this”, in a way that seems like admiration but is actually a passive-aggressive swipe at my life and work priorities.  Someone will ask this despite the fact that it’s really not possible to miss the point more.

4 thoughts on “A year of books: a beginning”