If that sounds like I’m a bit excited, it’s because I am.  I’ve been working on Charles Darwin’s Barnacle and David Bowie’s Spider for about four years, and finally I can share it with all of you.  It’s a book about the names of organisms – the scientific, or Latin names – and some people thing those are dull; but believe me, they’re anything but!

In particular, Charles Darwin’s Barnacle is a book about species that are named after people.  Such “eponymous” naming has a long and curious history, from Linnaeus naming a small and unpleasant weed to insult a rival botanist to the recent spate of scientific names based on pop-culture icons—such as David Bowie’s spider, Frank Zappa’s jellyfish, and Beyoncé’s horsefly.  Charles Darwin’s Barnacle explores the naming process as a way that scientists express themselves creatively, and it shows how scientific names open a window onto the passions and foibles of the scientific community. Scientists have named species for their heroes, for their wives and husbands and (sometimes) their not-so-secret lovers.  They’ve even, occasionally, named species for themselves – at least once, doing so by accident.  There are wonderful stories wrapped up in eponymous names.  I hope you’ll enjoy reading some of them.

Would you like to get your hands on a copy?  Here’s a US link; here’s a Canadian one; here’s one for Germany and one for the UK (the UK, mysteriously, has a later release date).  But you can also ask at your local independent bookstore or public library.

I hope you’ll find Charles Darwin’s Barnacle fun to read.  It was certainly fun to write!  One thing I learned from working on The Scientist’s Guide to Writing is just how enjoyable it is to write less technical prose than I usually do.  For Charles Darwin’s Barnacle, I spent hours going down amazingly entertaining rabbit-holes to trace the etymologies of names, the histories of pioneer naturalists both famous and obscure, and so much more.  I read Linnaeus’s handwritten draft manuscripts. I read 19th-century Australian newspapers. I read (with the help of Google Translate and some very kind colleagues) papers and theses in French and German and Latin and Russian and Swedish and Italian.  I read books by historians, by anthropologists, by sociologists, and by mathematicians.  I thoroughly mystified my university library’s Interlibrary Loan staff.  And finally, I got to work with my wonderful and talented illustrator, Emily Damstra, who found the beauty and personality even in a tiny land snail. 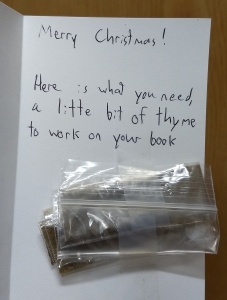 And now I can’t wait to write my next book. All I need to do is find the time.

There’s a lot going on this week.  Go for a walk; read a good book; and wash your hands.

Images: The first actual copy I got to hold; the sorting-hat spider Eriovixia gryffindori, © Emily S. Damstra; and a Christmas card from my son making it clear that I no longer have the family’s monopoly on Dad jokes.

11 thoughts on “My new book, “Charles Darwin’s Barnacle and David Bowie’s Spider”, is out today!”