I’ve just read Graham Moore’s The Last Days of Night, a novel based on the battle between Thomas Edison and George Westinghouse over AC vs DC electrification in the 1880s. This was a fascinating story*, but I’m taking off from it on a tangent today. The epigraph for Chapter 23 is a quote attributed to the architect and futurist Buckminster Fuller: “There is nothing in a caterpillar that tells you it’s going to be a butterfly”. Now, given my cringeworthy memories of what I was like in high school, I should be 100% behind this quote. The problem: as an entomologist, Buckminster Fuller was an excellent architect.

The quote, you see, is nonsense. 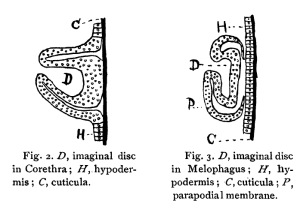 In fact, there are plenty of things about caterpillars that tell you they’re going to be butterflies. Granted, before the mid-1600s, western science hadn’t made the connection. Among those involved in figuring out that caterpillars turn into butterflies were the astonishing entomologist and artist Maria Sibylla Merian and the microscopist Jan Swammerdam. Swammerdam is particularly relevant because in 1669, he showed Cosimo II di Medici (the Grand Duke of Tuscany better remembered as patron to Galileo) something he’d discovered: imaginal discs. An imaginal disc is a little infolded pocket, concealed under the caterpillar’s exoskeleton and built of cells that will, in the pupal stage, expand and fold out to be come the wing (or the leg, or the antenna). An imaginal disc is something about a caterpillar that tells you it’s going to be butterfly, and we’ve known about them for 350 years.

So I thought critically about Buckminster Fuller’s attempt at wisdom; and as an entomologist, I was unimpressed.

Which brings me to mustard seeds. My father was a minister, and while I will admit to not always listening very carefully to his sermons, I remember one very clearly. Or at least, I remember the first few lines, which recounted the Parable of the Mustard Seed:

Another parable he put before them, saying, “The kingdom of heaven is like a grain of mustard seed which a man took and sowed in his field; it is the smallest of all seeds, but when it has grown it is the greatest of shrubs and becomes a tree, so that the birds of the air come and make nests in its branches.” (Matthew 13:31-32, Revised Standard Version, emphasis added)

“Oh, come on”, I told my father, “what nonsense!” The mustard seed isn’t the smallest of all seeds; in fact, it’s a pretty big seed. (OK, it’s no coco-de-mer.) The smallest of all seeds is almost certainly an orchid – some of the epiphytic orchids have seeds weighing less than a microgram (you’d need a hundred million of them to make an 8-ounce jar of Orchid Grey Poupon).

Now, the Mustard Seed Size IssueTM is old news, of course, endlessly rehashed by earnest evangelists and sophomoric teenagers like (at the time) me. It’s rather obvious, I hope, that the metaphor of the mustard seed communicates something** that’s independent of its literal truth or falsehood. Or at least, it wasn’t obvious to teenage me, when my father attempted to explain; but it’s obvious to me now.  And my memory of the Mustard Seed Size Issue gave me the jolt I needed to see the truthiness in Buckminster Fuller’s remark. Yes, as an entomologist I know it’s nonsense. But as a human, I should appreciate the underlying sentiment: indeed, sometimes the potential of something isn’t evident until it’s fully developed. Sometimes the (metaphorical) caterpillar really doesn’t tell you it’s going to be a butterfly.

This is, I think, just one manifestation of something we scientists do far too much: critical thinking, misplaced. We’re trained to think critically – but we should probably think critically about when that helps, and when it doesn’t. Often, we’re too eager to fall upon an incorrect detail and reject an important bigger picture. We’ve all seen Reviewer #2 do it. In hindsight, the grad-school journal clubs I was part of were little more than competitions to see who could most quickly find something – anything – wrong with a paper. And don’t get me started on social media. As a general rule: if you come to a situation determined to find its worst face, you’ll find it. There’s an inaccuracy; there’s a way to impute a bad motivation rather than a good one; there’s a way to see almost anything in society as a harbinger of the end times. But you know what? There’s always a way to do the opposite. There’s always a way to see the value of a metaphor that isn’t literally true. There’s always a way to see good (if failed) intentions. There’s always a way to see progress in small steps. Yes, sometimes you may look naïve when the worst case later proves to be true – but that’s a small price to pay to understand Buckminster Fuller’s point, and to see the best of the world as often as you can. Think critically about critical thinking.

*^Easily the best novel about electrical transmission I’ve ever read. OK, I couldn’t resist that, but obviously it’s about the people involved: Edison and Westinghouse and Nikola Tesla; JP Morgan; the opera singer Agnes Huntington and the young lawyer Paul Cravath. Thoroughly recommended.

**^Whether or not you happen to subscribe to any version of Christianity, of course. I’m analyzing the parable of the mustard seed here as a metaphor, not as a religious statement.