Today: some entomology.  Yes, you knew I’d get there eventually.

Here’s Canadian folksinger Murray McLaughlan, with Out Past the Timberline (from his terrific 1983 album Timberline). It’s a reflection on Canada’s North, and beautifully atmospheric; it’s a real shame there isn’t a video for this song. I’ll admit the science content is a bit fleeting.

What strikes me is this lyric:

There are several kinds of insects one might liken to “hungry dust”, but McLaughlan shows an understanding of the ecology and entomology in getting it exactly right. “When spring waters run”, it’s the black flies (Diptera: Simuliidae) that come. That’s because their larvae live in running water where they can filter particles from the current. (In contrast, both mosquito [Diptera: Culicidae] and deerfly [Diptera: Tabanidae] larvae feed in standing water, in ponds, puddles and swamps.) When spring waters run, the wetted area of stream and rivers increases, and black fly larvae feed and grow – and soon, the adults emerge in search of blood meals. 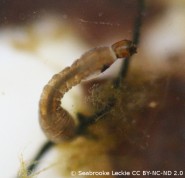 If you’ve never seen the larvae: they’re adorable, like little limbless Michelin men. But their behaviour is even better. At their hind end, they have a little ring of hooks, and with their salivary glands they spin a small cushion of sticky silk that’s affixed (underwater!) to a stone or some other hard surface. Then they squinch their body over so the posterior hooks can grab the silk. Thus anchored, they feed by holding a pair of brush-like feeding fans up to the current.

Of course, if you feed by filtering particles from the current, you don’t want a spot directly downcurrent from another larva – there, the water is depleted. If two larvae find themselves closer than they’d like, they’ll butt heads and wrestle until one cedes position.  As a result, you’ll find larvae rather evenly spaced out on the surfaces they anchor to.

So black fly larvae are adorable and fascinating. But the adults? When spring waters run, and the black flies come, they can indeed be like a cloud of hungry dust. Those I appreciate a little less. It’s an evocative lyric, though, and its entomological correctness makes Out Past the Timberline a science song for me.

And now for this week’s I-just-like-it bonus. Let’s get seriously weird, with Dread Zeppelin’s Heartbreaker (At the End of Lonely Street). Dread Zeppelin is a reggae-infused Led Zeppelin cover band fronted by an Elvis impersonator (wait! don’t click away yet!) and while it’s definitely a novelty act, it’s a quality one and for some reason it works for me.

I have a soft spot for bands who are clearly having a lot of fun, and there’s no doubt Dread Zeppelin are always doing that.

2 thoughts on “Music Mondays: Out Past the Timberline”