Is science a laughing matter? That could mean a lot of things, I guess, but one place the question gets raised is around the construction of titles for scientific papers. Is it OK for a title to be funny?

I’ve had a longstanding (but admittedly weird) interest in the issue of humour and beauty in scientific writing. Not much gets written about that (except by me), but one place there’s just a little bit of literature is where humour intersects with the construction of titles. That’s in part because titles are important, and in part because the availability of easily-extracted data connecting titles with citation rates has given birth to something of a cottage industry in trying to associate features of titles with high or low citation fates of the papers in question. For title features suitable for automated scoring, like length, lots of data and analyses are available. But humour isn’t like that. This lack of data doesn’t stop authors of writing guides from advising against humour in titles (not mine, of course, but this one, and this one, and this one, for instance). How good is this advice?

It’s not that there are no data on funny titles. I know of three attempts to measure associations between title humour and citation rates.  Sagi and Yechiam (2008) had undergraduates score humour in titles of psychology papers, and found that the papers with the funniest titles were (slightly) less heavily cited.  Two similar but more recent attempts, by Subotic and Mukherjee (2014, in psychology again) and by Murphy et al. (2019, in ecology and entomology) found no effect of humour on total citation. But don’t these results seem surprising? The function of a title is to entice readers to a paper, and funny titles get noticed: they circulate on social media, they’re taped to office doors, they’re passed around lunch rooms. Shouldn’t papers with funny titles be more read, and therefore more cited?

Enter the pandemic. Early in the COVID-19 pandemic, as our field work was shut down and everyone needed work they could do at home, we decided to take a crack at resolving the paradox. We’ve just* posted the results as a preprint, under the title “If this title is funny, will you cite me? Citation impacts of humour and other features of article titles in ecology and evolution”. Check it out!

You should read the whole thing, but (spoiler alert) here’s the bottom line. We took all 2,439 papers published in 2000 and 2001 in nine ecology and evolution journals, extracted their titles, and had a panel of 11 volunteer scorers assess them for (intended) humour. Then we correlated their subsequent citation performance with their humour scores. The result? A negative correlation – funnier titles are cited slightly but significantly less often (left panel, below). 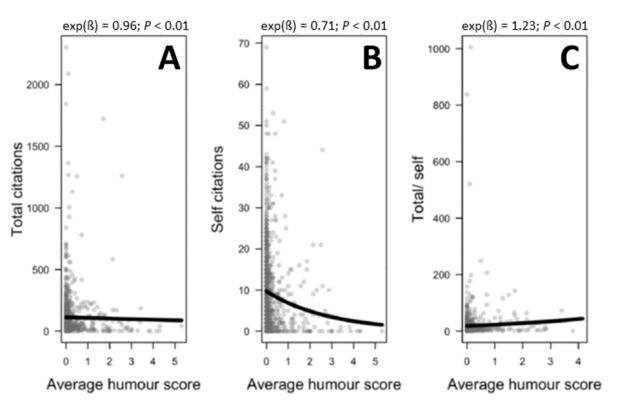 But: there’s a big but.** We think this analysis misses something important – as did all three of the earlier papers I cited above. What if scientists give funnier titles to less important papers? Scientific writing is extremely conservative, and so it wouldn’t be a shock if we were more hesitant about cracking wise in the papers we think might make our careers. Our key insight, I think, is that you can measure and correct for this! That’s because self-citation surely doesn’t depend at all on the title of a paper – after all, the paper’s authors know what’s in it, and don’t have to be recruited to read the paper by its title. And sure enough, it’s less important papers that get the funny titles (negative slope in the middle panel, above). This effect is more than enough to account for the raw citation-humour association. If you take the ratio of total to self citations – as a measure of importance-corrected citation impact – the association between humour and citation rate flips around and becomes positive! Funny titles are cited more, not less, than their stodgy counterparts.

Some authors have expressed the belief that science is no laughing matter, and that giving papers funny titles only suggests that even their authors don’t take the science seriously. We’ve shown, at least for ecology and evolution, that one needn’t worry about that. There may sometimes be other reasons to refrain from humour in a title, but humour won’t relegate a paper to obscurity. If anything, it’s the other way around.

Thanks to my awesome coauthors Chloe Cull and Easton White, and to a panel of humour scorers. This pandemic project was a lot of fun! Way, way more fun than the (sadly continuing) pandemic.

Images: Laugh out loud, by stux via Pixabay.com. Three-panel graph, from our preprint, © the authors, licensed CC BY-NC-ND 4.0.

*^Not on purpose, but as it turns out, almost exactly on the second anniversary of the pandemic. I’m going to refrain from speculating on how many more anniversaries the pandemic will have before it’s behind us, but it’s startling just how hard many people and governments are working to make sure that’s a big number.

18 thoughts on “Do funny titles increase or decrease the impact of scientific papers? New preprint!”